The rain pitter-pattered down from the sky. A light mist hung over the town. A stranger walked along a cobbled street dampened by slick rain. Beckoned by peals of laughter and the gentle clinking of ceramic cups, he turned onto a garden lined walkway and towards a simple timbered structure. The lacquer of the wood twinkled warmly. The low-hanging cloth of navy blue blended in with the shadows while the stark whiteness of the smooth calligraphy stood out in contrast. It read wa-shoku. Japanese cuisine. Pulling his lips back and tucking them into a smile, the wet-speckled man ducked under the lintel and into a world all its own.

You would reckon my introduction to Japanese food, uninfluenced for the most part by outside sources, would be one of subtle tastes and delicate presentation. It wasn’t. I also think my first residence, however temporary, would have been more expensive if I was served something professional. Being from a landlocked country like America, I’m used to grease, beef, and cheese that’s been beaten, battered and fried in some manner. Eating so much natural bounty from the ocean is unusual to me and I confess to craving an In-and-Out burger.

For what it’s worth, the meals I had at Hotel Yonekyu were delicious and very filling. 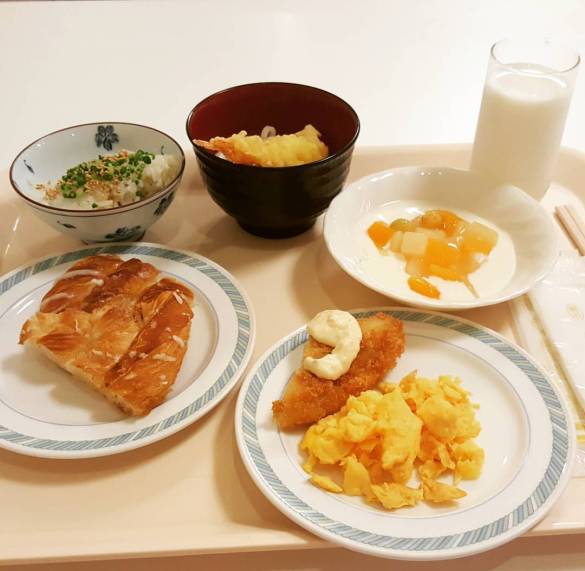 Rice is the main staple in Japan. Brought over via Korea thousands of years ago during the Yayoi Period, the Japanese stuck true to their character and made it their own. Hotel Yonekyu offered up four types of rice its patrons could choose from: plain white, unagi (鰻, eel), some kind of medley with bits of tiny prawns and chirimen-jako (縮緬雑魚, young sardines), and a brown sort.

Next, comes the cold noodles with tempura shrimp. After rice, noodles are another staple. They’re super versatile! All you need to know is that they taste delicious. The shrimp tempura I topped mine with was light and fresh.

For dessert, I ate watery yogurt with fruit cocktail. I’m damned sure that cocktail came from the can. Being used to having milk with breakfast, I had some in this instance, too. Did you know that Japanese milk is fattier than American milk? The going rate here is 3.6% whereas American whole milk is around 3.2%. 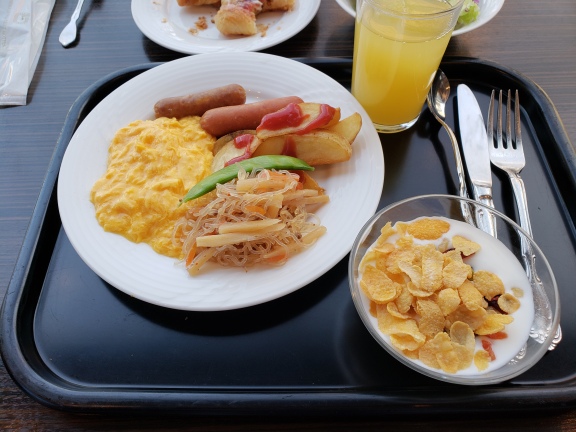 Lastly, we have the pastry. Wherever it came from, it was delicious.

Since I’ve been living in Gotemba, I’m pleased to announce I’ve seen two bakeries. When I have funds, I will most definitely treat myself because, quite frankly, I never saw a bakery in Las Vegas. I’m sure they exist, though.

Here is a shameless video from the Japanese Propaganda Depart… I mean, the Tourism Industry… giving you a small glimpse of Japanese cuisine. I will also include an older educational video that’s around 40 minutes. Please watch it at your leisure.