Let’s talk Myers-Briggs. Just about everyone and their mom should know what this is or has had heard of it at some point. It’s basically a psychological test that puts an individual into a personality type based on the level of disagreement or agreement they have towards choice statements (i.e. After a hard work week, you prefer to be around a boisterous crowd rather than sit at home -> Greatly Agree, Agree a little, etc.).

There are 16 types of personalities, by the way, which are grouped into opposites:

From the get-go, we can all basically say that we’re either extroverted or introverted. For some, it’s definitely a deciding factor in regards to hobbies or jobs. I was one of those people. Myers-Briggs was the test I took when I was having trouble figuring out what I wanted to do after college. You might laugh and say that’s funny, but it was doubly more useless than the bullshit ASVAB test the military gets you to take under the guise of Want to Know What Job is Best for You?! Take Our Test!

When I was at the precipice of deciding whether or not I should go into chiropractic work (Plan A: what I thought I should do) or go to Japan (Plan B: what I wanted to do), I took a Myers-Briggs test. My result? INFP: Introverted Intuition Feeling Perceiving or “The Mediator” or “The Healer.”

At least… I thought it sounded like me? I was very concerned with wanting to be of use to someone, caring for others, and providing support. Basically, I wanted to nurture someone without having to have children I wasn’t ready for. At the same time, I wanted the freedom to be creative and pursue my art. Doing a quick Google search on “INFP careers” gave me a list of things I was already interested in or already doing!

Here are some examples:

One career that stuck out was “teacher.” Because of what I was going to be doing in Japan (being an ALT, Assistant Language Teacher), I thought, “This must be a sign. I love it when I can share my knowledge with others and enlighten them. Maybe this is what I’m supposed to be doing.”

Fast-forward to 2020 and here I am, taking the test again.

I was inspired to do so by a young person I follow on Instagram. They had posted about feeling insecure about their artwork and not feeling like they were good enough, what with being surrounded by better and more advanced artists.

I felt that so hard that I had this drive to tell them they weren’t alone. I too have the same huge weight on my mind. It’s so humongous in fact that I have more or less stopped drawing.

Anyway, so what did I get this time? ISFP-T: Introverted Sensing Feeling Perceiving – Turbulent, “The Composer” or “The Adventurer.” But… what does “turbulent” mean? This is the first time I’ve seen it.

Turbulent Adventurers are just as likely to explore, just a little closer to the familiar and deeper within their comfort zones.

[They] may be less sure about their contributions… question the worthiness of their ideas and results. [They may even feel uncertain about them]. Their doubts may make any breakthrough successes hard to accept.

[They] are less likely to feel competent in the face of stress. At first glance, this might appear negative. But whenever these personalities encounter something that feels stressful, their lack of confidence is likely to cause them to be more concerned about it – perhaps even to feel dread because of it. These feelings may bring about a heightened awareness of actual or potential problems.

…societal pressures still seem to influence many Adventurer personalities. Standard scorecards that pinpoint who is doing well in a community carry more weight among Turbulent Adventurers…

Turbulent Adventurers are likely a little less independent, but more likely to be open to working on a team or collaborating. They need to know that others approve of them and that the people who matter to them are all right with what they do.

Oh, OK. So, basically, I’m sensitive and constantly worried about what others think. Mmyeah, that sounds about right. More often that not, I let those negative emotions suppress my talents. But what about the rest of it? I’ll bullet-point it here along with a comparison between an INFP and an ISFP. 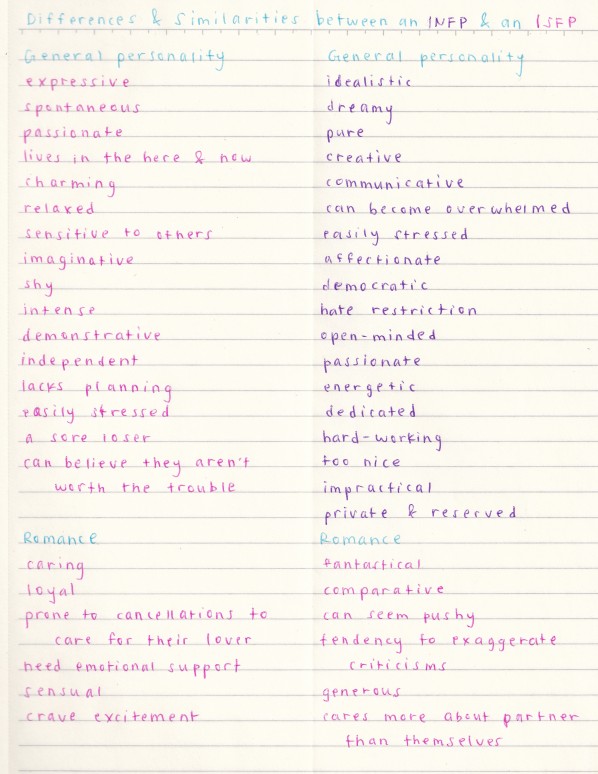 At this point, you’re probably going, “But they’re the same thing.” Heck, even the career suggestions are similar or outright exact. I want to personally thank the people over at reddit for digging deep into the topic of Myers-Briggs and MBTI typing. Having read their collected information on INFP vs. ISFPs, I can certainly say that I feel more at ease with my typing as an ISFP rather than an obsessive INFP. Granted, I can still get obsessed about things, but it seems that it’s in a different manner compared to my sibling, the INFP.

Do you know your acronym? Has it helped in determining your path in life? Let me know!